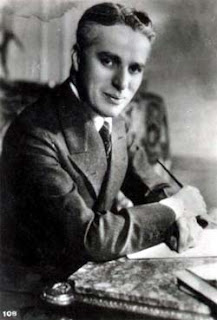 started watching Chaplin's movies yesterday on TCM because nothing else was on. Once I saw one, (The Gold Rush) I wanted to know if that particular silent film was the exception (because I liked it) or the rule. I watched several of them. Stayed up all night watching them, actually.

Today I watched "The Great Dictator", his first "talkie". "Modern Times" was released the technology was available for voice, be he still chose to be "The Tramp" and didn't say anything.

Y'all, if you've never seen a Chaplin movie, you NEED TO! I don't mean "If you get the chance" or "If you're bored". I mean you MUST see this man in action.

It's not only his movies, but who he was that has me loving Chaplin.

In between movies, they told some stuff about his real life. Like the fact that reporters always asked if he was Jewish (he wasn't) and he said "I prefer not to answer." 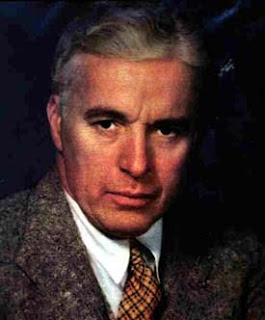 I just finished watching "The Great Dictator", which is the movie where he spoofed Hitler & Mussolini. Excellent. The "TCM Guy" said that some people had called it preachy, but I found it inspirational in between the comedy bits.

Chaplin was a genius.

Here are the movies you should definitely see, IMO (Movie Plots are from IMDb.com):

City Lights (Silent) - A "romantic" comedy where The Tramp (Chaplin) struggles to help a blind flower girl he has fallen in love with. The ending was so sweet. That silly Tramp Smile is...I can't even find the words. It made me tear up a little bit. :-)

The Great Dictator - In Chaplin's satire on Nazi Germany, dictator Adenoid Hynkel has a double... a poor Jewish barber... who one day is mistaken for Hynkel. Chaplin's "German" is hilarious!

Modern Times (Silent) - The Tramp struggles to live in modern industrial society with the help of a young homeless woman. So good. He goes to jail for a crime he didn't commit, foils an escape attempt, and then tries to get back into jail after they pardon him.

I seriously wonder if there was anything that Chaplin couldn't do! He sang the Title Song for one of his movies, juggled, roller skated, etc. You name it, he seems to have done it. His writing was so clever. It's all the "little bits" & unexpected things that made his movies great.

You know the excitement you feel when you find something new that you LOVE? That's what I feel. I wish it was Charlie Chaplin MONTH on TCM!

Here's one of my favorite clips from Modern Times. The Tramp is hired as a singing waiter (with no experience) and he can't remember the words to the song. The woman writes them on his cuff, but then when he's dancing his cuffs fly off. This is the best clip that I could find. Enjoy!

Oh! And here's the part from The Great Dictator where he's allegedly "preachy".