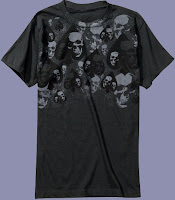 aturday we went to get Evan's eyes checked. The doctor (I like him, I think he's great with kids) said that maybe it was time for Evan to get contacts.

You can guess my response.

I know grown people who get eye infections because they don't take care of their contacts the way they should. Evan wouldn't even shower if I didn't make him. I will NOT get him contacts just so he can scratch his cornea trying to get them out or not clean them and get eye infections.

Anyway, afterwards we got 3 t-shirts and 2 pair of pants with the money that MD gave him. I convinced him to get a red t-shirt because he looks good in red. He did! *faint* Then he got 2 skull t-shirts. *sigh*.

When will this Goth/Emo/Depressing phase end?